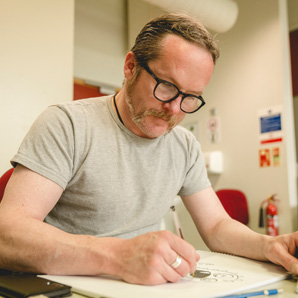 Mark Cullen is a technical artist and educator at LYIT. He delivers modules on emerging technologies, 3d modelling and animation, digital film and illustration. He has a keen interest in studying new creative production pipelines and technologies and transfers this knowledge to his teaching practice. He is currently researching and working in the areas of digital content production for augmented reality, virtual reality and games environments. He also continues to work on animation projects both 2d and 3d based.

Starting his career as an artist and art director in advertising houses in Dublin, Mark quickly moved into animation where he focused his interest in emerging realtime rendering environments and 3d. He co-founded Torc Interactive (later Instinct Technologies) in 1999 where he remained until 2008 . The company specialised in realtime rendering technology for games and visualisation and from this a sister company was formed, Darkwater Studios, to concentrate solely on games development.

While remaining a board member until its close in 2011 he left in 2008 to become an academic fellow in the University of Ulster specialising in digital human visualisation. He worked on methods of recreating human anatomy and articulation using 3d digital technology. His focus continues to remain on producing digital content for and using new and emerging technologies. Why work with us?